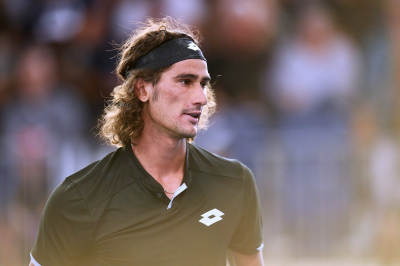 Harris became the first qualifier to reach the Dubai Tennis Championships final, when he rallied to defeat Canadian world No.12 Shapovalov 6-7(5), 6-4, 7-6(6) in a match that took 2 hours and 41 minutes.

The 24-year-old, who trailed 2-4 in the second set, saved three of the four break points he faced to reach his maiden ATP 500 final.

Harris has won seven matches in seven days to make history at the ATP 500 event. En route to the final, the World No. 81 has won the two biggest matches of his career against World No. 4 Dominic Thiem and World No. 12 Shapovalov.

In the final-set tie-break, Harris served well under pressure to keep pace with his opponent. Shapovalov used his forehand to dictate rallies, but Harris earned his place in the final when the Canadian narrowly missed an attempted backhand down the line.

"I don’t have many words right now. I am super happy with that win," Harris told the ATP Tour during an on-court interview.

"Being a set and 2-4 down is mentally and physically a little bit troublesome for me, but I found my best tennis from there. I am just extremely happy with the result right now."

"I have been waiting for some results like this. To have so many of them in one week is a fantastic feeling. I have got one more match to go."

The Capetonian will face either Russian world No. 8 Andrey Rublev or his world No.42 Aslan Karatsev also from Russia in Saturday’s final. In his only previous tour-level final in Adelaide last year, Harris fell in straight sets to Rublev.