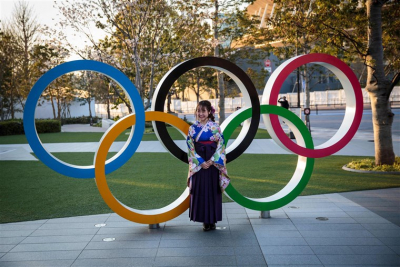 No international fans will be permitted at the delayed 2020 Tokyo Olympics and Paralympics this summer because of concerns over the coronavirus pandemic.

Japanese authorities told the Olympic and Paralympic committees it was "highly unlikely" that entry to the country could be guaranteed.

Organisers said the move now gives "clarity" to ticket holders and helps ensure "a safe and secure Games for all participants and the Japanese public".

The Games are due to begin on 23 July.

The Paralympics follow the Olympics a month later, from 24 August.

Organisers said the "challenging" Covid-19 situation in Japan and many other countries, global travel restrictions and emergence of variant strains of the virus had led to the decision and that ticket holders would be refunded.

The Olympics were postponed by a year in March last year because of the growing spread of coronavirus across the world.

It is the first time in the event's history it has been postponed, with more than 11,000 athletes from around 200 countries scheduled to take part in 2020.

Thomas Bach, president of the International Olympic Committee, said the move is a "great sacrifice for everybody".

"We share the disappointment of all enthusiastic Olympic fans from around the world, and of course the families and friends of the athletes, who were planning to come to the Games," he said. "For this I am truly sorry.

"Every decision has to respect the principle of safety first. I know that our Japanese partners and friends did not reach this conclusion lightly.

"We stand shoulder-to-shoulder at the side of our Japanese partners and friends, without any kind of reservation, to make the Olympic and Paralympic Games Tokyo 2020 a great success."

International Paralympic Committee president Andrew Parsons said "difficult decisions" had to be made with safety the "top priority".

"It goes without saying that in an ideal world we would prefer to have international spectators at the Games," he said.

"But at the moment we must acknowledge that due to the global pandemic we are not living in an ideal world."

The exclusion of international fans comes as another major financial blow to the Tokyo Games.

Earlier this year, Japanese prime minister Yoshihide Suga said the Games would be "safe and secure" and could serve as a "symbol of global solidarity".

However, a poll at that time by national broadcaster NHK showed the majority of the Japanese general public oppose holding the Games in 2021, favouring a further delay or outright cancellation of the event.

Twitter
More in this category: « Fulham squander chance to escape bottom three as Leeds take win. Head-to-head clash of Titans at Athletix Invitational Meet powered by AVANTI. »
back to top