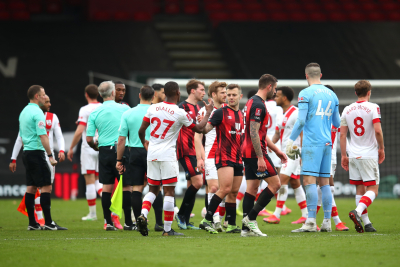 Southampton put their Premier League troubles to one side as they reached the FA Cup semi-finals by brushing past Championship hosts Bournemouth.

Nathan Redmond inspired the Saints, who have lost 10 of their past 12 league games, with two goals and an assist.

The visitors went ahead when Moussa Djenepo coolly slotted in Redmond's precise pass after a driving run.

Redmond's stunning solo goal gave the visitors a commanding half-time lead before he calmly steered in the third.

"We had aspirations of getting [to Wembley] at the start of the season. It's a chance for us to put the league form behind us," Redmond said postmatch. "It's good for us to get into the next round going into the international break where we can work on a few things while some of the boys are away.

"We know each other well and how to get the best out of each other. Today it clicked, so hopefully we can end the season on a high."

Southampton will find out their semi-finals opponent when the draw is made at half-time in Sunday's tie between Leicester and Manchester United, live on BBC One around 17:45 GMT.

The semi-finals will take place on the weekend of 17-18 April, with the final at Wembley on 15 May.