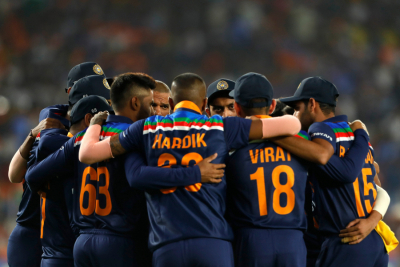 England lost their Twenty20 series decider to an India side that followed a batting masterclass with some wonderful bowling in Ahmedabad.

The hosts' 224-2 was their highest T20 score against England and set the tourists the challenge of their second-highest successful chase in the shortest format.

They were on course at 127-1 after 12 overs, only for Bhuvneshwar Kumar to bowl a brilliant 13th, conceding three runs and crucially having Jos Buttler caught at long-off for 52.

Dawid Malan remained, but when he was bowled by the impressive Shardul Thakur for 68, 83 from the final five overs was a huge ask.

A three-match one-day international series in Pune begins on Tuesday.