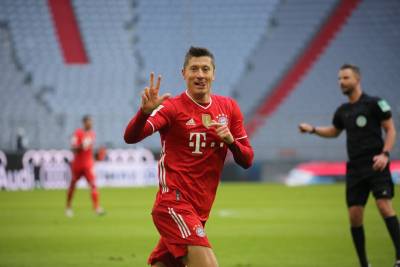 Bayern Munich retained their four-point cushion at the top of the Bundesliga with a 4-0 home rout of VfB Stuttgart on Saturday with Robert Lewandowski netting a hat trick after they had Alphonso Davies sent off early on.

Canada international left-back Davies was shown a straight red card in the 12th minute for a studs-up challenge on Wataru Endo but his dismissal only galvanised Bayern with Lewandowski firing them ahead five minutes later with a goal that put him second place on the all-time Bundesliga scoring chart.

The Poland striker has now scored 42 times for Bayern this season.

However, three goals in the following 11 minutes put the game beyond doubt and the hosts cantered to all three points after the restart.

The result left Bayern top on 61 points from 26 games with second-placed RB Leipzig on 57 ahead of their highly anticipated clash on April 3 after the international break.