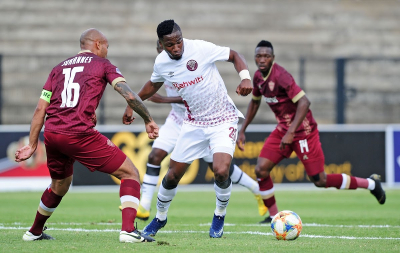 Chippa United fought back from two goals down to hold Swallows FC 2-2 in a DStv Premiership clash at the Nelson Mandela Bay Stadium in Gqeberha on Saturday afternoon.

The result sees the Birds extend their winless run to eight matches in the league and remain in fifth place on the standings, while the Chilli Boys have now gone seven games without a victory and continue to hover just above relegation trouble in 13th.

Swallows came flying out of the blocks and found themselves 2-0 up within the opening quarter hour. The first goal arrived on eight minutes, with Kgaogelo Sekgota rounding off a swift attacking move with a crisp finish past Chippa goalkeeper Ayanda Mtshali.

Ruzaigh Gamildien added a second in the 11th minute, capitalising on some poor defensive organisation from the hosts as he turned home an assist from Zaphaniah Mbokoma – giving the Birds a stranglehold on the game before Chippa had even found their footing.

In fact, the Soweto side should have gone into the break with a three-goal lead, as Mbokoma blew a one-on-one chance with the Chilli Boys ‘keeper late in the half, somehow blazing over the target when it seemed easier to score.

Chippa finally had some joy in attack early in the second half, with a penalty earned by Peter Maloisane. Anthony Laffor took on the spot kick and made it 2-1 in the 50th minute, giving the Eastern Cape side a sniff of a comeback.

And the Chilli Boys duly brought themselves back on level terms on the hour mark, with substitute Augustine Kwem showing quick reactions to latch onto a rebound from the woodwork, stemming from Mdlinzo’s original effort, and shooting past Vries for 2-2.

Ultimately the spoils were shared, with the full-time score 2-2.

Meanwhile Cape Town City’s winless run in the DStv Premiership extended to seven matches after they were held 1-1 by Golden Arrows at the Sugar Ray Xulu Stadium in Clermont on Saturday afternoon.

The Citizens last won in the league in late January and find themselves in eighth place on the log.