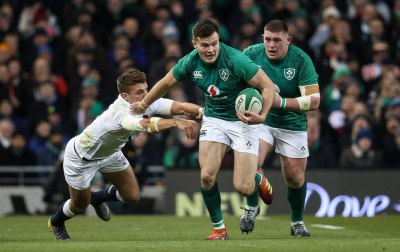 Ireland produced by far their best performance of the Andy Farrell era to beat a sorry England 32-18 in the Six Nations in Dublin.

Late touchdowns from Ben Youngs and Jonny May after Bundee Aki's red card did not mask a dismal English display.

Eddie Jones' side are now set for a fifth-place finish.

Ireland's win moves them up to second in the table but their final standing will not be decided until France and Scotland meet next week in their re-arranged fixture that will end this season's competition.

Regardless of their final position, the manner of the win over England, a first in five attempts, will live long in Irish memories in addition to vindicating Farrell's constant insistence that this is a team travelling in the right direction.

As for England, their lifeless and ill-disciplined display after such an engrossing win over France a week ago is arguably a new low for a side who only a year-and-a-half ago reached the World Cup final.

Meanwhile Scotland ran in eight tries as they dispatched a limp Italy at Murrayfield and returned to winning ways in the Six Nations.

However, it would require a bonus point in the rearranged trip to France - a far tougher assignment - and other results to go their way.

Twitter
More in this category: « Swallows fail to leapfrog Pirates while Arrows edge closer to Sundowns. Late goals from Gundogan and De Bruyne see Man City book their place in the semi-finals. »
back to top