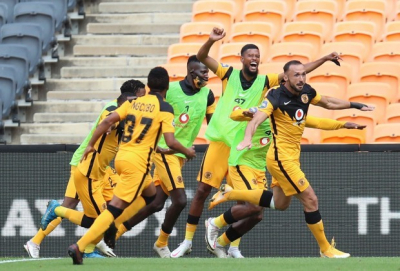 Daniel Cardoso, Reeve Frosler, Nkosingiphile Ngcobo and Samir Nurkovic were all recalled to the Chiefs line-up while Pirates made only one alteration, with Siphesihle Ndlovu starting ahead of Fortune Makaringe as Siyabonga Mpontshane continued in goals.

Pirates started the better of the two teams with the first effort on goal in the fifth minute, but Deon Hotto saw his powerful shot from the edge of the box saved by the Chiefs keeper.

Chiefs took a stranglehold of the game after that and should have taken the lead in the 20th minute when Bernard Parker found Happy Mashiane in space inside the box, but he fired straight at the keeper.

Amakhosi went close again five minutes later, this time Samir Nurkovic saw his stinging shot from the edge of the box shave the wrong side of the woodwork.

Pirates created a chance for themselves on the half hour mark when Onassis Mntambo worked his way into the box, but he saw his 14-yard effort superbly saved by Daniel Akpeyi.

Neither team could break the deadlock before the break and entered halftime locked at 0-0.

Ten minutes into the second half, however, and Chiefs took the lead when Nurkovic met a cross from Lazarous Kambole with superb 12-yard bicycle-kick that found the corner of the net, 1-0.

Amakhosi should have put the game beyond doubt in the 77th minute when Mashiane played Nurkovic through on goal, but he fired wide with just the keeper to beat.

Chiefs boss Gavin Hunt then brought on Philani Zulu for Mashiane in order to preserve his side's lead going into the final ten minutes and Pirates piled on the pressure in that final ten minutes, but were unable to find an equalizer as Chiefs won 1-0.

Amakhosi next assignment will be a CAF Champions League match at home against Wydad Athletic Club on Saturday, 3 April while their next DStv Premiership outing will also be at home against Stellenbosch FC on Tuesday, 6 April.

Meanwhile the Baccuneers will also next be in CAF Confederation Cup action away to Al Ahly Benghazi on Sunday, 4 April, while their next DStv Premiership clash is at home against Maritzburg United on Wednesday, 7 April.