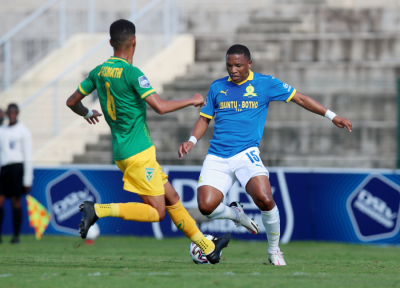 Black Leopards came back to hold Mamelodi Sundowns to a 1-1 draw in the DStv Premiership match at the Loftus Versfeld Stadium.

The draw saw Sundowns open a four-point lead at the top of the league standings, while Leopards remained 16th on the log.

Sundowns got off to a dream start as they broke the deadlock just 10 minutes into the match through Mosa Lebusa after Lidoda Duvha failed to clear their lines.

Lebusa headed home Lyle Lakay's well-taken corner-kick to make it 1-0 to Sundowns as the left-footed central defender netted his maiden league goal of the season.

The hosts continued to search for more goals after taking the lead and they had a golden opportunity to double their lead after Themba Zwane was sent through on goal and the Bafana Bafana international was brilliantly denied by Leopards goalkeeper Jonas Mendes from a one-on-one situation in the 13th minute.

However, Leopards improved as the second-half progressed and they began containing the likes of Gaston Sirino and Zwane, who was replaced by Khuliso Mudau in the 63rd minute.

Roderick Kabwe was the man, who beat Sundowns goalkeeper Denis Onyango with a decent finish to make it 1-1 after a good move by the visitors.

Sundowns looked to restore their lead in the dying minutes with another glancing header from Lebusa off another corner, but the attempt went over as Leopards held on for a point.

The victory took Usuthu to fifth place on the league standings, while Vhadau Vha Damani remained 15th on the log.