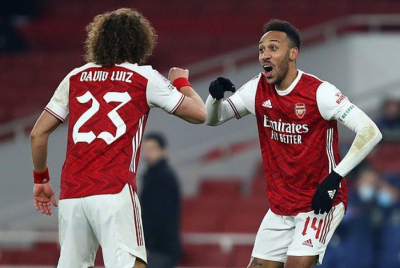 Arsenal came from three goals down to rescue a point in a stunning game against London rivals West Ham in the Premier League.

West Ham punished a sleepy Arsenal with Jesse Lingard, Jarrod Bowen and Tomas Soucek putting them in complete control and set to go level on points with fourth-placed Chelsea.

The visitors gave themselves hope when an Alexandre Lacazette effort went in off Soucek for an own goal just before half-time.

And Lacazette completed the comeback with a thumping header from Nicolas Pepe's cross, before both sides had late chances to win the game.

West Ham stay in fifth place with 49 points from 29 games, two below Chelsea. Arsenal moved up a place into ninth spot before Aston Villa's clash with Tottenham Hotspur later on Sunday.