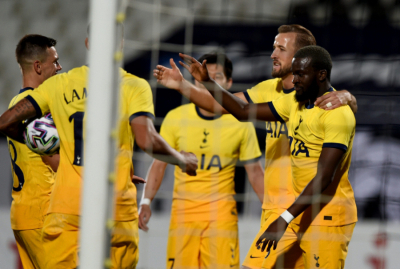 Manager Jose Mourinho said it is "sad" Tottenham had to suffer their shock midweek Europa League exit in order to produce the committed performance that saw them secure the victory at Aston Villa which keeps Spurs in the hunt for a top-four Premier League finish.

They were labelled a "disgrace" by captain Hugo Lloris after the 3-0, last-16 second-leg defeat by Dinamo Zagreb on Thursday that saw Spurs throw away a 2-0 aggregate advantage and left their hopes of qualification for next season's Champions League pinned on their league placing.

But Carlos Vinicius' opener and Harry Kane's second-half spot-kick ensured Tottenham made the necessary winning response to climb to sixth in the standings, three points behind Chelsea in fourth.

"OK, I am really happy with that, but it is sad we need such a bad defeat to have this kind of reaction," Mourinho told BBC Sport.

"This should not be a reaction, this should be a permanent state of mind, permanent soul in the team. I think that is our next challenge - to have this standard in terms of effort, commitment, sacrifice.

"Independent of results, this has to be always there to dignify our jobs, the people that love us, the club and the fans. I am a bit sad by realising we can have this soul and we haven't in the last couple of matches.

"I opened my heart as a guy with more than 20 years in football and lots of experiences, I just care that they did it and the next challenge as a group is we do it every match."

An interchange of slick passes between Lucas Moura and Kane following a poor clearance by Villa goalkeeper Emiliano Martinez allowed Vinicius to put Spurs ahead from close range after 30 minutes.

And Kane avoided a potentially nervous finish to the game for his side, sending Martinez the wrong way with his penalty after being fouled by Matty Cash.

Villa, who are 10th and seven points behind Spurs in the Europa League positions, failed to register a shot until the 58th minute in the continued absence of skipper Jack Grealish - and substitute Anwar el Ghazi's powerful drive into the side-netting was as close as they came.

Aston Villa return to action after the international break with a home meeting with Fulham on Saturday, 3 April and Tottenham are away to struggling Newcastle a day later.