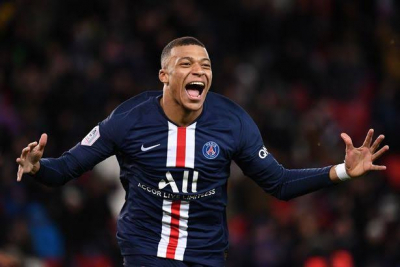 The 22-year-old France striker's efforts either side of the break saw him become the youngest player to score 100 goals in the French top flight.

Mbappe opened the scoring from a tight angle, before Danilo Pereira made it 2-0 with a half-volley and Angel di Maria added a third early in the second half.

Victory lifts PSG to the summit on goal difference above Lille, who were beaten 2-1 at home by Nimes earlier on Sunday.

With 84 league goals for PSG and 16 for Monaco, Mbappe is the youngest player to reach the 100-goal milestone in the French top division after Herve Revelli, with Saint=Etienne, in 1969.

Victory against third-placed Lyon also saw Brazilian forward Neymar return from a six-week injury layoff, coming off the bench to replace Mbappe in the 70th minute.

He walked off the pitch without any apparent pain with 20 minutes left to be replaced by Neymar, who made his first appearance since picking up an adductor muscle injury in a French Cup game against Caen on Feb. 10.

"When I scored the [team's] fourth goal, the first thing I thought about was the fifth," said Mbappe.

"It's an important milestone in my career but I'm still very young and I can improve."

Twitter
More in this category: « Serena Williams withdraws from Miami Open following oral surgery. Hunt admits that Chiefs' not their best performance in the Soweto derby. »
back to top