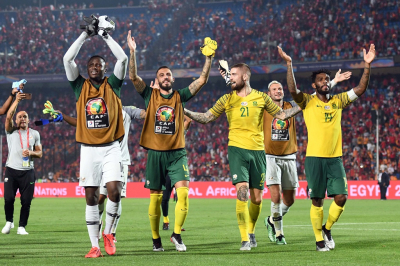 Bafana Bafana coach, Molefi Ntseki has called up 5 more players to the national set-up to beef up the squad ahead of crucial AFCON qualifiers against Ghana and Sudan this week.

Bafana Bafana play the Black Stars of Ghana on Thursday, 25 March 2021 at FNB Stadium (kick off 18h00) before flying to Sudan for the final match against the hosts in Khartoum on Sunday, 28 March.

With certain players still having issues to travel to South Africa due to Covid-19 restrictions, coach Ntseki has decided to add five more new faces to the squad.

Strikers Lebo Maboe and Thabiso Kutumela have been called up as replacements for injured Kermit Erasmus and Bradley Grobler while Thabo Nodada, Mothobi Mvala and Vincent Pule have been added to the squad.

France’s Ligue 1 and 2 have declared that no players will be released‚ ruling out Montpellier’s Keagan Dolly for Bafana Bafana.

The other players who will not join Ntseki’s squad are Bongani Zungu (Rangers‚ Scotland)‚ Dean Furman (Carlisle‚ England) and Abu Dhabi-based Thulani Serero.

"We have called up 30 players but we have a situation with the European clubs refusing to release players‚ and because of that‚ we will not be replacing anybody until this matter has been finalised‚ "Ntseki said.

Ntseki also has to deal with injuries to local-based players and has called up five as cover‚ in case there are more issues.

Team Doctor, Dr Thulani Ngwenya said while there were some issues regarding certain overseas-based players, they were busy negotiating with respective teams to make sure that all called up players are available for the upcoming games.

Good news for Bafana Bafana was the early arrival of star striker Percy Tau who plays in England for Brighton & Hove Albion. Tau jetted into the country on Monday morning and joined his teammates for some video analysis session.

Bafana Bafana will train this afternoon at Discovery Park (15h30) in Sandton and tomorrow at FNB Stadium at 18h00. They will round off their preparations on Wednesday with another training session at the match venue at 16h00 while the visitors (Ghana) will train at 18h00.

Soon after the Ghana match, Bafana Bafana leaves the country for Sudan, via Ethiopia and return home soon after the match on Sunday.

Twitter
More in this category: « 'Formula 1's marathon season is a junction in history'. Notoane names U23 squad for training camp ahead of Olympics. »
back to top