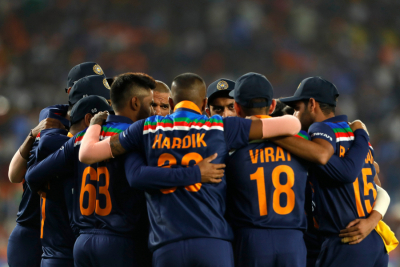 England squandered the chance to win a fluctuating first one-day international against India, losing by 66 runs in Pune.

Jonny Bairstow's scintillating 94, from only 66 balls, had the world champions well on course for their target of 318.

India's pace bowlers roared back, and an England side missing the rested Joe Root lost five wickets for 41 runs before eventually slumping to 251 all out.

The hosts had earlier been lifted to 317-5 by Shikhar Dhawan's 98 and 58 not out from Krunal Pandya, whose 26-ball half-century was the fastest by a debutant in one-day internationals.

On a bruising day, England captain Eoin Morgan spent time off the field with split webbing on his right hand, while Sam Billings sprained his collarbone joint attempting a stop on the boundary.

Rohit Sharma was struck on the elbow by Mark Wood and, most seriously, new Lancashire signing Shreyas Iyer suffered a partial dislocation of his left shoulder.

The second in the three-match series is on the same ground on Friday.

Twitter
More in this category: « Top amateur Maas to test himself against Sunshine Tour pros. British & Irish Lions' summer tour to go ahead as scheduled in South Africa. »
back to top