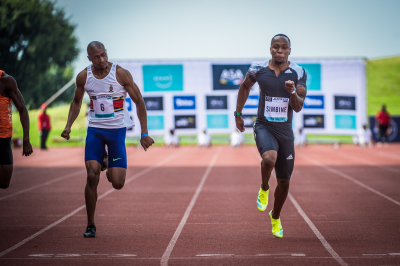 Akani Simbine beats Luxolo Adams to win the 100m men's final to clock 10.00 with an assisted +2.1m/s tailwind, just outside the legal limit of +2.0m/s for an official time in the first leg of the ASA Athletix Invitational Meet powered by AVANTI at Ruimsig Athletics Stadium, Johannesburg. Photo Credit:  Tobias Ginsberg.

Athletes shone across the board on Tuesday, with the first ASA Athletix Invitational Meet powered by AVANTI producing some spectacular performances at Ruimsig Athletics Stadium in Roodepoort.

It was also a welcomed return to elite competition four months before the Olympic Games in Tokyo, Japan for many athletes whose preparations had been frustrated by a continuous lockdown the government necessitated by the Covid 19 pandemic.

In a highly anticipated battle of the day, Commonwealth champion Akani Simbine showcased his class by storming to victory in the men's 100m sprint. Though he was pushed slightly by a +2.1m/s tailwind, just outside the legal limit of +2.0m/s for an official time, Simbine did well to open his 2021 season with an unofficial 10.00.

Just behind him, Luxolo Adams again displayed his potential in the short sprint, taking second place in 10.08.

Twitter
More in this category: « Real Madrid will host Liverpool in Spain after flight restrictions lifted. FIFA extends ban of former chiefs Blatter, Valcke by over 6 years. »
back to top