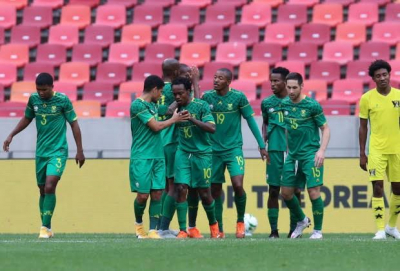 Brighton & Hove Albion player Percy Tau said Bafana Bafana are aware that the two last qualifiers (against Ghana and Sudan) will be difficult but is confident the boys will deliver the goods.

South Africa who are second in Group C behind Ghana on head-to-head count, take on the Black Stars at FNB Stadium on Thursday with the winner of this match almost assured of one of the two spots in Cameroon. Both teams have 9 points each, while third-placed Sudan has 6 and Sao Tome are still to earn a point in the Group.

Tau said there was everything to play for both teams as the Group is still open going into the last two games.

"We all know if one loses and another one wins, the winner gains an advantage to go to AFCON. But I am confident that we will work hard and we should get the all-important result. We also want to use the home ground advantage we have over Ghana and do better than we did against them in the away game.

"We watched the videos of that game in which we lost 2-0 and saw what we did wrong. We hope we are in a very good frame of mind and that we will do well," added the tear-away striker.

He said while people speak of the team going into this game under pressure, the boys were focussed but relaxed.

"We have been in these situations so many times and our main focus is just go there, do well and qualify for AFCON," he said adding that it would be ideal to wrap up the qualification as soon as possible.

He however, said even if it means going into the last game to qualify, 'the most important thing was for the team and country to ultimately qualify for AFCON'.

Tau said he was not under any pressure to carry the hopes of the nation on his shoulders.

"No, no, I believe whatever we intend to achieve, we must do it as a collective. When I am given the responsibility, I share it with my teammates, we all share responsibilities to try and help the team to qualify. We share the pressure as a team but as I said, the ultimate prize is qualification, " he emphasised.

Tau said he was humbled by widespread support he had received from his fans in Mzansi, Africa and the world at large since moving to Europe.

"I appreciate their support and must continue to do so with love. I would also want everyone to be safe out there during this pandemic, take measures to stay safe and remain healthy. These are the people who make us who we are and I really appreciate their love and I am glad my work has always made them proud, " he concluded.

The match on Thursday kicks off at 18h00 and Bafana Bafana leaves for Sudan soon after the match.

Twitter
More in this category: « FIFA extends ban of former chiefs Blatter, Valcke by over 6 years. Manchester City to install 'safe standing' rail seating at Etihad Stadium. »
back to top