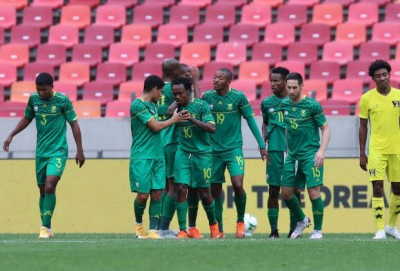 Bafana Bafana were held 1-1 by Ghana at the FNB Stadium in Johannesburg on Thursday evening, with Group C in the Africa Cup of Nations qualifiers set to go down to the wire.

The result at Soccer City is enough for the Black Stars to punch their ticket to Cameroon 2022 – as they are now guaranteed to finish in the top two of the group – but Bafana Bafana’s fate will go down to their final game away to Sudan on Sunday.

Bafana should have claimed the lead in the fifth minute, with Themba Zwane doing great work to tee up Thapelo Morena with a clear chance in the penalty area, but the wingback struck his effort into the side netting.

Another fine chance for the hosts arrived in the 19th minute, with Sifiso Hlanti’s cross from the left picking out Percy Tau, but the diminutive striker couldn’t get over the header and direct an effort on target. Less than 60 seconds later Hlanti sent a thunderbolt on target from just outside the 18-yard box, but Ghana goalkeeper Razak Abalora made a sharp save to tip the ball over the crossbar.

Bafana suffered an injury blow inside the opening half hour when midfielder Andile Jali succumbed to what looked to be either or a groin or thigh problem, with Ben Motshwari rising off the bench to make his senior international debut.

Ghana grew into the game as it progressed, though they struggled to create openings for the likes of Mohammed Kudus and Emmanuel Gyasi, with SA goalkeeper Ronwen Williams rarely called into action in a first half which ended goalless.

The Black Stars introduced Osman Bukari off the bench at the start of the second half, and they claimed the lead within four minutes of the restart: Kudus received a pass from right-back Benson Annang, shifted past one defender and stabbed home a low shot which went in via the inside of the post.

Bafana Bafana hit back almost immediately, levelling the game at 1-1 in the 52nd minute: Ruzaigh Gamildien put Tau into space on the right of the penalty area and the striker sent a low effort past the right hand of Abalora, cleverly shooting through the legs of a defender.

Elsewhere Egypt will appear at the next Africa Cup of Nations after they secured a 1-1 draw away to Group G qualifying rivals Kenya at the Nyayo National Stadium in Nairobi.

The result is enough for the Pharaohs to join Comoros (who secured their first-ever tournament ticket earlier in the day by holding Togo 0-0) in qualification for Cameroon 2022. The Harambee Stars, meanwhile, have been mathematically eliminated.

The teams will return to Group G action on Monday, 29 March, with Egypt at home to Comoros and Kenya visiting Togo.

Twitter
More in this category: « Chiefs management split on Itumeleng Khune's future at the team. Wayde, Jobodwana and Akani to headline a star-studded 2nd leg of the ASA Athletix Invitational Meet. »
back to top