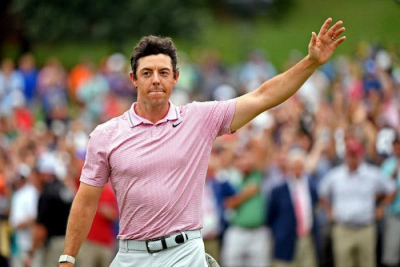 Northern Irishman Rory McIlroy recovered from his error-strewn first day at the WGC Matchplay in Texas with a 4&3 win over American Lanto Griffin.

The four-time major winner, who found a swimming pool during his loss to Ian Poulter, led the 46th seed from the first to the 15th and final hole.

Poulter, seeded 60th out of 64, faces Griffin in his final group match.

The 2010 champion was three-up going into the 16th, but lost the next two holes. After Smith made par at the last, Poulter held his nerve to match his rival and secure his second win.

McIlroy will be hoping he defeats Smith and his Ryder Cup team-mate slips up to stand a chance of advancing to the knockout rounds at the weekend.

The European pair are two of the 64 players at Austin split into 16 groups of four, with only the group winners reaching the next stage.

In the event two or more players in a group are equal with the highest-point totals, a stroke play hole-by-hole playoff will determine the player that advances.

Second seed Justin Thomas was eliminated from the tournament thanks to a 2&1 defeat by fellow American Kevin Kisner, his second successive loss in Group Two.

Kisner was four-up after the 10th and although the 2017 US PGA champion briefly rallied, he fell short against the defending champion.

The 24-year-old was two-up after the 15th hole, but the Masters champion won the next two, including an eagle at the 16th. The Group One rivals tied the last hole as the match finished all-square.

There was better news for American fifth seed and US Open champion Bryson DeChambeau, who bounced back from his opening defeat to secure a 2&1 win over South Korea's Si Woo Kim.

Group Five will go down to the wire after Southport's Tommy Fleetwood beat Frenchman Antoine Rozner 4&3.

Rozner had stunned DeChambeau on Wednesday, while Fleetwood will play the American in his final group match on Friday, having tied his opening contest against Kim.

There was also a first Group 15 win for England's Matt Fitzpatrick, who overcame Canadian Corey Conners 5&4.

Twitter
More in this category: « Germany stroll to easy opening win over Iceland in World Cup qualifying. AFCON Wrap:Egypt, Comoros and Gambia among qualifiers,Zambia, DRC bow out. »
back to top