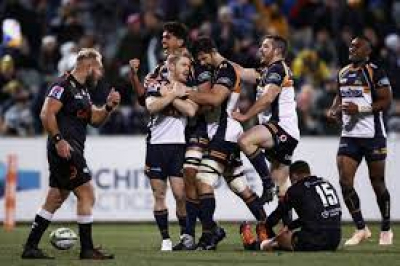 Sharks Head coach Sean Everitt unfurled a satisfied smile after his Sharks showed the kind of attacking intent to beat the Bulls that earned them nationwide admiration during Super Rugby last year.

Everitt said the appetite to get at their opponents in the way they did to the Bulls, from the first minute of Friday night’s 45-12 win, had never left them.

The period of conservative rugby during Super Rugby Unlocked and parts of the Currie Cup were necessary to navigate testing new playing conditions over the summer, in an effort to remain competitive.

But the shackles came off completely at a drenched Shark Tank as the Sharks put five tries in 25 sensational first half minutes and added two more late in the match to close the preparation series with a resounding win over their Pretoria foe.

"When you get the opportunities, you’ve got to grab them and tonight (Friday night) there were a lot of turnover and counterattacking opportunities," said Everitt.

"We want to encourage the guys to [exploit] that because it’s de-structured defence. We didn’t really move away from the way we play.

"We had a lot of disruptions during Super Rugby Unlocked with injuries and everything. Sometimes, with all the changes you make every week, you have to keep the plan very simple and be somewhat conservative if you want to win trophies.

"But at the same time, we do have a flexible game plan that we can adjust according to the conditions that present themselves and the different defences.

Yes, we want to attack. That’s our identity, it’s our DNA. Our DNA shifts more towards transitional rugby, from attack to defence and defence to attack, so that’s where our strengths lie.

"I think the guys defended really well tonight and put the Bulls under immense pressure. Credit to the team for their work rate.

"They were really keen to put in a good performance and they did just that."

The Bulls scored just two tries in the contest but, to their credit, they stemmed the bleeding from the 25th minute right up until the dying embers of the match when Rynhardt Jonker and Sanele Nohamba scored late for the hosts.

By that point the Bulls were down to 13 men, following two yellow cards for the visitors.

Despite going more than half an hour without troubling scorers, Everitt was delighted with the Sharks’ overall performance in their last game before the Rainbow Cup commences next month.