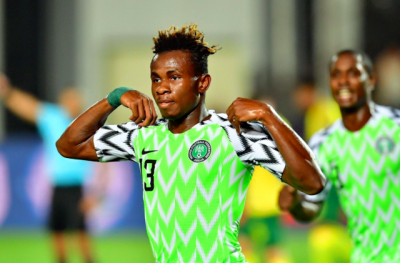 Nigeria qualified for the 2021 Africa Cup of Nations on Saturday after Lesotho and Sierra Leone drew 0-0 in Group L.

The result in Maseru guaranteed the Super Eagles a top-two finish in the section ahead of their top-of-the-table clash away to Benin in Porto-Novo later Saturday.

Benin need one point from the match against Nigeria to also secure a place at the finals of the premier African national team competition.

Nigeria travelled by sea to west African neighbours Benin on Friday after players raised concerns about the poor road network linking the countries.

Meanwhile already qualified Tunisia and Equatorial Guinea will meet in what is effectively a dead rubber match at Stade Olympique de Rades on Sunday.

Both countries have already booked their spot at the 2021 Africa Cup of Nations (Afcon), with Equatorial Guinea having done so in dramatic fashion on Thursday. Emilio Nsue scored in second half stoppage-time to lead Nzalang Nacional to a 1-0 win over Tanzania as they punched their ticket, at the Taifa Stars' expense

Tunisia will be without right-back Mohamed Drager for Sunday's match due to an accumulation of yellow cards but head coach Mondher Kebaier will be able to call upon Ferjani Sassi, who missed the match against Libya for the same reason.

A solitary strike from Wahbi Khazri led Tunisia to a 1-0 win in the reverse fixture hosted in Malabo in November 2019.

Twitter
More in this category: « Bafana Bafana in good spirits ahead of Sunday’s deciding AFCON qualifier against Sudan. Max Verstappen takes pole position in Bahrain Grand Prix. »
back to top