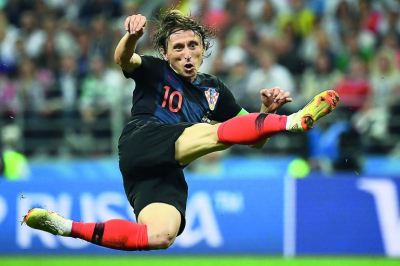 Midfielder Modric, who made his debut in 2006, surpassed former defender Darijo Srna's record of 134 caps.

The 35-year-old captained his side who, despite creating 17 chances, found it difficult to break down the Cypriots.

The only goal of the game came in the 40th minute when Mario Pasalic headed in from close range.

Meanwhile the Netherlands bounced back from their disappointment against Turkey with victory over Latvia, as Stephanie Frappart became the first woman to referee a men's World Cup qualifier.

Feyenoord's Steven Berghuis and Sevilla's Luuk de Jong both scored in a match the Dutch dominated.

The game was played in front of 5,000 home fans in the 55,000-capacity Cruijff Arena in Amsterdam.

The lucky few had to follow strict Covid-19 protocols to get the chance to watch the national side.

They witnessed a dominant Netherlands performance, in stark contrast to the display during the 4-2 loss in Turkey last week.

Frank de Boer's side should have scored more than the two goals against Latvia, having created an incredible 37 chances.

Who did it best? Reply with flag...#WCQ