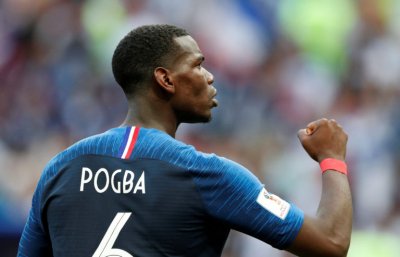 France forward Anthony Martial went off after receiving treatment for an injury during his country's World Cup qualifying win over Kazakhstan.

Martial's clever turn and pass set up Ousmane Dembele to make it 1-0 against the team ranked 122 in the world.

Sergiy Maliy produced a fine clearance as Martial looked to make it 2-0 before the defender headed into his own net.

Manchester United player Martial was replaced by Kylian Mbappe, who had a penalty saved after being fouled.

Didier Deschamps' side are back in qualifying action on Wednesday away to Bosnia-Herzegovina.

Paul Pogba started against Kazakhstan after Deschamps said on the eve of the game that the Manchester United midfielder needed regular game time to rediscover his best form.

Pogba played for an hour before being replaced by Adrien Rabiot.

France moved top of the standings with four points, ahead of Bosnia, who they face away on Wednesday, Ukraine and Finland.

Ukraine host Finland later on Sunday. Kazakhstan have zero points after playing their first game of the campaign.