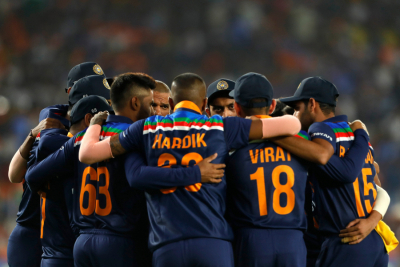 England were beaten in a thrilling one-day series decider against India, despite Sam Curran's heroic 95 not out.

Chasing 330, England looked beaten at 200-7 in the 31st over, only for Curran to keep them afloat by adding 57 with Adil Rashid and 60 with Mark Wood.

In an incredible five-ball spell from the end of the 48th over, Wood overturned being given out lbw, was dropped, and Curran was also put down.

Fourteen were needed from the final over in Pune. After Wood was run out, last man Reece Topley squeezed the single that left Curran to get 12 from four balls.

As left-arm seamer T Natarajan held his nerve, Curran could find the boundary only once, leaving England seven runs short on 322-9 and India 2-1 series winners.

Wood had earlier played his part in bowling India out for 329, battling the heat to take 3-6 in two overs as the hosts lost their last four wickets for eight runs.

For once, England's powerful top order failed to ignite the chase, with the tourists slipping to 95-4 against some skilful India pace bowling.

They were revived by Dawid Malan, Liam Livingstone and Moeen Ali, before Curran set up the grandstand finale.

England captain Jos Buttler: "Both sides made some mistakes throughout the game and both sides played some brilliant cricket. It made for a great game. We're indebted to an unbelievable innings from Sam Curran to nearly get us over the line."

India captain Virat Kohli: "When the top two teams battle each other you get exciting games, that was what happened tonight. Sam played a really good innings to keep them in the hunt. Our bowlers kept taking wickets at the right periods."

England's Sam Curran: "Obviously the main thing in the end was we didn't win the game but I am really happy with the way I played. It was a great experience for me. I haven't done something like that for while.

"I had messages from the dugout to take the majority of the balls. I tried that but fair play to Natarajan. At the end he nailed his six deliveries. It is a massive learning curve. I will take a lot from it but I am a little disappointed."

Twitter
More in this category: « Lewis Hamilton wins in Bahrain after Max Verstappen forced to give up lead. Harry Kane guides England to comfortable win vs. Albania. »
back to top