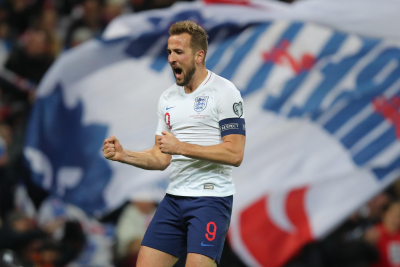 England maintained their winning start to the 2022 World Cup qualifying campaign with a comfortable victory over Albania in Tirana.

Albania provided more of a challenge than hapless San Marino in England's opening 5-0 win at Wembley but once they had survived an early scare when Myrto Uzuni missed a great chance for the side ranked 66th in the world, this was routine for Gareth Southgate's side.

England captain Harry Kane lifted the mediocrity of an attritional first half on a slow surface when he scored his 33rd goal for his country, a superbly guided diving header from Luke Shaw's cross seven minutes before the interval.

This set the platform for a more positive second-half display, Mason Mount adding a composed second in the 63rd minute after sustained England pressure saw Phil Foden's effort turned on to the post by Albania keeper Etrit Berisha and Kane lifting a close-range shot over the top.

"I thought it was a good performance, it's never easy playing away against a tough side," Kane told ITV.

"Maybe we were a bit slow to start but we changed the formation a bit halfway through the first half and got more runners in the box.

"Getting the goal before halftime was great and we controlled the second half well."

England stretched their unbeaten run in World Cup qualifiers to 23 games but now face their sternest test so far in this campaign as Poland and their master marksman Robert Lewandowski come to Wembley on Wednesday (19:45 BST).

Meanwhile Northern Ireland's search for a first win during 90 minutes under Ian Baraclough stretched to 10 matches as the USA won a low-key friendly 2-1.

Giovanni Reyna and Christian Pulisic scored for the visitors as the USA moved into a two-goal lead.

After losing to Italy on Thursday, Baraclough's men face Bulgaria in their second World Cup qualifier on Wednesday.

Twitter
More in this category: « Curran heroics not enough in Pune thriller as India seal ODI series. Ntseki’s job on the line after Bafana Bafana fails to qualify for AFCON. »
back to top