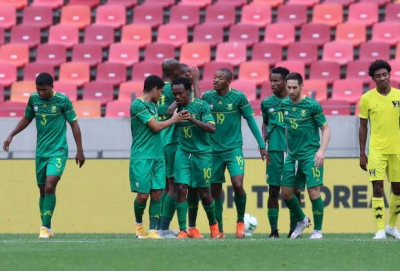 Sudan beat South Africa 2-0 at Al-Hilal Stadium in Omdurman on Sunday to book their spot at the 2021 Africa Cup of Nations (Afcon).

Victory moved the Falcons of Jediane up to 12 points in Group C, a point behind Ghana who defeated Sao Tome and Principe 3-1, but more importantly, two points ahead of South Africa who will take no part at next year's showpiece in Cameroon.

Sudan got off to the best possible start as Saifeldin Bakhit Maki shrugged off his marker from a free-kick before nodding the ball past Ronwen Williams in the Bafana Bafana goal, with five minutes on the clock.

Bafana Bafana almost hit back immediately and Percy Tau was only denied an equaliser through a superb last ditch intervention from Samawal Merghani, who denied the forward a tap-in after Themba Zwane had eliminated the Sudan goalkeeper.

Thulani Hlatshwayo went closer in the 12th minute from a corner-kick. The South African skipper rose highest and had Ali Abu Eshrein beaten, but was unlucky to watch his header canon off the woodwork and away from danger.

It went from bad to worse for Hlatshwayo in the 31st minute as Sudan punished South Africa on the transition. A quick counter-attack found the visitors wanting and Mohamed Abdel Raman took full advantage as he bamboozled the Orlando Pirates centre-back before thumping the ball past Williams to double Sudan's lead.

Tau had a chance to halve the deficit on the cusp of halftime, but Eshrein did well to keep out the Brighton & Hove Albion forward's attempt after the hosts had failed to clear their lines.

Bafana Bafana coach Molefi Ntseki mad a number of changes around the hour mark in attempt to breath new life into a wilting Bafana Bafana display and South Africa started to turn the screw with Ben Motshwari and Thapelo Morena going close for the visitors.But those chances only provided South African supporters with false hope as Hubert Velud's troops ultimately held on for a well deserved win and a ticket to next year's Afcon tournament.

Ntseki is likely to be forced to walk the plank by his South African Football Association employers, even though they should also come under scrutiny after the ignominy of failing to qualify for Cameroon.

The victory saw the Black Stars qualify for the finals as Group C winners, while the Falcons and True Parrots Team ended their qualifying campaign winless.