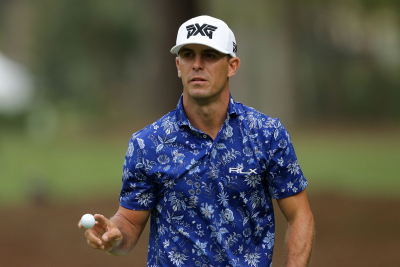 Scheffler won the second hole but Horschel chipped in to win the fifth and was two ahead by the ninth.

An increasingly scrappy match saw eight holes on the back nine halved with Horschel parring the 17th to win.

Europe Ryder Cup hopeful Victor Perez, beaten by Horschel in the semi-finals, was defeated 2&1 by Matt Kuchar in the match to decide who finished third.

American Kuchar, winner of this event in 2013 and runner-up in 2019, won four holes out of five from the eighth to go four up but Perez hit back to win the next two with birdies.

However, the match ended on the 17th when Perez was unable to hole a 25-foot birdie putt after Kuchar was in for par.

Despite Sunday's two defeats, it has been an excellent week for the Frenchman who enhanced his reputation as a solid matchplay golfer and he also picked up 600 Ryder Cup points for finishing fourth.

The final was a tense and lengthy affair between two Americans also trying to force their way into Ryder Cup reckoning.

Scheffler's birdie to win the second proved to be the only hole he would win as he scrambled his way round a course he knows so well having spent four years at the University of Texas in Austin.

The 24-year-old, searching for his first PGA Tour win, had beaten European Ryder Cup players Ian Poulter and Jon Rahm in Saturday's knockout rounds, but struggled to recapture that form in Sunday's final.

He was often wayward off the tee and hit just five of the first 13 greens in regulation.

As the play got slower, the mistakes increased. Scheffler found the water on the par-five 12th, but Horschel failed to take advantage, hitting his ball into a greenside bunker from 100 yards as they halved the hole in bogey sixes.

Scheffler benefitted from free drops after hitting his tee shots behind spectator stands on the 13th and 15th holes and they also halved the 16th in par fives after both sliced their drives into the rough.

The par-three 17th proved to be the final hole. Both players found the green and after Horschel missed his 24-foot putt, Scheffler had an 11-footer to win the hole and take the match down the last. But he missed to hand Horschel the title after four hours of play.

"It was one of those days where I didn't play very well," conceded the 34-year-old American. "I wish I had but I grinded it out."

The slow play started in the semi-finals with Scheffler edging past Kuchar in a glacial match that took four hours and 15 minutes to complete.

He was two up after 11 holes but found the water on the 12th and 13th holes to allow Kuchar to level the match.

Scheffler holed a 10-foot birdie putt to win the 17th and a par was enough to close out a 1UP win on the 18th, with Kuchar missing a 10-foot birdie attempt that would have taken the match into sudden death.

Horschel and Perez won three holes each in the opening seven of their match as they reached the turn all square.

However, the Frenchman bogeyed the 10th, 11th and 14th holes to go three down and although he won the 15th with a birdie, another bogey at the 16th handed Horschel a 3&2 victory.

Twitter
More in this category: « Ntseki’s job on the line after Bafana Bafana fails to qualify for AFCON. Ineos dominate as Adam Yates wins Volta a Catalunya, Geraint Thomas third. »
back to top