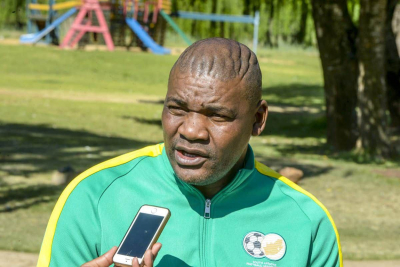 Bafana Bafana coach Molefi Ntseki admitted that his side made life difficult for themselves after failing to qualify for the 2021 African Cup of Nations.

Ntseki was commenting after Bafana Bafana's 2-0 loss away to Sudan which saw them missing out on playing in next year's AFCON finals - instead it will be Sudan and Ghana who go to Cameroon.

Having needed just a point from the Sudan game to qualify, meant that South Africa's elimination was all the more painful.

It's a big disappointment for all of us. If you look at how we started, we were very positive and looking forward to qualifying," Ntseki said.

"If you look at the games we won, we became very confident to qualify. The expectations were created to say the team will do well against Ghana at home and against Sudan away."

The coach pointed to the quick turn-around time between the Ghana match on Thursday and Sunday's game away in northeast Africa as a contributing factor.

"Drawing against Ghana made life very difficult for us coming in Sudan. We knew it would be a foreign land with foreign challenges," he said.

"The travelling also, having to travel immediately after the game, one session preparation and then we play a match. The players tried very hard and we also tried very hard to put everything together with the analysis of Sudan and our own analysis against Ghana."

Conceding as early as the fifth minute really set Bafana back, and the failure to take some good chances also proved costly.

"We started on the wrong foot because we conceded very early," Ntseki said.

"The idea was not to concede because we were fully aware that even before the game started we were in, because of the point that we had in our bag.

"Missing chances does not win you games. In the second half we approached the game differently, we made tactical changes and changes in terms of playing personnel.

"But on the day we could not get the goal and could not see ourselves getting an equaliser."

The objective from SAFA was clear, to qualify for every continental and world tournament to put Bafana Bafana on the map again in terms of the football we play and the results we get.

Twitter
More in this category: « Wales send Kanu,Matondo and Roberts home from international duty after protocol breach. Sergio Aguero to leave Man City at end of season after 10 years. »
back to top