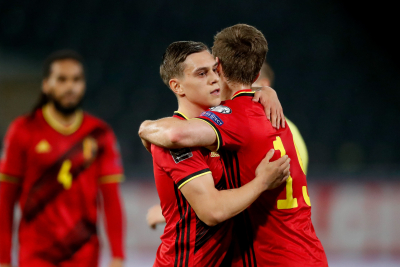 Michy Batshuayi got the first before Hans Vanaken's volley made it 2-0 to the number one team in Fifa's rankings.

Trossard's exquisite finish from 22 yards extended the lead before Jeremy Doku added the fourth before half-time.

The result lifted Belgium, with seven points from three games, to the top of Group E.

Luxembourg beat Republic of Ireland on Saturday and led the European champions through Gerson Rodrigues' header.

But Liverpool forward Jota headed home in the final attack of the first half.

Ronaldo tapped in early in the second half to turn the tide in Portugal's favour, with Joao Palhinha glancing in a header to seal the win.

Before that Jota had gone close with a header that hit the bar, while Ronaldo could have had a second goal himself, but failed twice to beat home goalkeeper Anthony Moris after running clear of the defence.

What at one stage looked to be a night of such promise for Luxembourg ended with them reduced to 10 men as Maxime Chanot was shown a second yellow for a foul on Renato Sanches.

The win takes Portugal to seven points in qualifying Group A, level with Serbia.

Elsewhere Daniel James' late header gave Wales a precious win over the Czech Republic in a fiery World Cup qualifier in which both teams had a man sent off.

The visitors dominated a goalless first half with Jakub Jankto missing several chances, while Gareth Bale wasted the best opportunity of all for Wales.

Czech striker Patrik Schick was shown a straight red card early in the second half for raising his hand to the face of Connor Roberts, who was later sent off for a second booking.

As both sides searched desperately for a winning goal, Bale delivered an inviting cross from the left wing, which James met with a brilliantly directed header to secure Wales' first win of the campaign.

The result moves Wales up to third place in Group E, one point behind the Czech Republic in third and four adrift of leaders Belgium, albeit having played one game fewer than both.

Despite only being Wales' second game of the campaign, this fixture already had a heightened sense of significance for both sides.

When the draw was made, Belgium were overwhelming favourites to top Group E and qualify automatically as the world's number one-ranked team.

As a result, Wales and the Czech Republic were expected to battle it out for second place and a play-off spot, though the visitors might have set their sights higher after drawing with Belgium on Saturday.