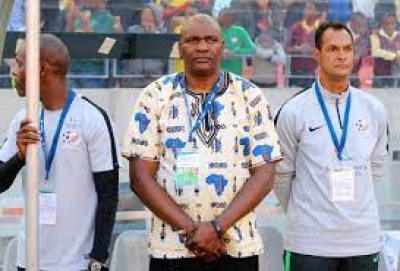 South Africa Football Association (Safa) CEO Teboho Motlanthe has announced at a press conference at Safa House in Nasrec on Wednesday that Bafana Bafana coach Molefi Ntseki has been fired.

This follows Sunday’s 2-0 defeat to Sudan in Omdurman that saw Bafana fail to qualify for the 2021 Africa Cup of Nations (Afcon), when a draw would have seen the South Africans reach the tournament finals in Cameroon in January and February next year.

"The decision was taken at about 10am. This was an NEC decision, it was taken in a round-robin," said CEO Motlanthe.

Bafana, was hit by some withdrawals due to a Fifa circular saying clubs did not have to release players over Covid-19, had also failed to beat an even more under-strength Ghana at FNB Stadium on Thursday.

That result, though, had been left mostly academic by the Confederation of African Football’s (Caf) head-to-head ruling, with the mathematical permutations indicating that  Bafana needed a draw or win away to Sudan in their closing match.

Ghana, who beat Bafana 2-0 in the opening game in Cape Coast in November 2019, topped Group C with 13 points.

Sudan qualified in second place with 12, Bafana were third with 10, and Sao Tome and Principe had zero.

Ntseki took over from Stuart Baxter in 2019.

He was in charge for nine games, winning four of those against Sao Tome e Principe (twice), Sudan and Mali. There were also draws with Ghana and Namibia, and defeats to Ghana, Zambia and Sudan.

Following a meeting on Tuesday, it is reported that things turned sour as Ntseki refused to resign from his position, prompting the SAFA hierarchy to take stern action in terminating his contract.

The 51-year-old also made things difficult for himself after openly stating "I have failed as a coach", in his post-match interview with the Bafana media team.

Calls from outside have already mentioned the likes of Benni McCarthy, Shakes Mashaba, Carlos Queiroz, Pitso Mosimane and even Muhsin Ertugral.

Twitter
More in this category: « SA National Aquatic Championships and Olympic Trials head for friendly city of Gqeberha. SA Rugby president backs idea of a return of fans for Lions tour. »
back to top