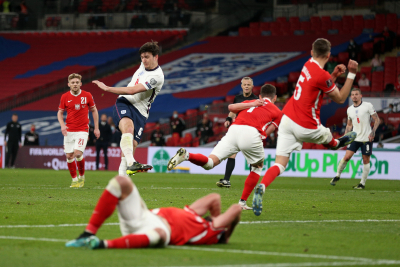 Goran Pandev had put North Macedonia ahead in the 2022 World Cup qualifier on the stroke of half-time.

Ilkay Gundogan equalised from the penalty spot early in the second half after Leroy Sane had been fouled.

It was a first defeat in Group J for Germany and the first goals they had conceded in qualifying.

Meanwhile Harry Maguire's late winner made it a maximum nine points from three World Cup 2022 qualifiers for England as they overcame Poland at Wembley.

Poland presented a much sterner test than the formalities against San Marino and Albania and it looked like England would have to settle for a point until Maguire struck five minutes from time.

And yet England almost paid the price for a largely average performance after the break as Poland, who were without injured world-class striker Robert Lewandowski, equalised when a dreadful error by Manchester City's John Stones saw him concede possession on the edge of the area and Jakub Moder beat Nick Pope emphatically.

It was the first goal Pope had conceded in seven England appearances and looked like being costly until Stones made amends by showing superb athleticism to head Phil Foden's corner into the path of Maguire, who lashed a powerful drive high past Wojciech Szczesny to keep manager Gareth Southgate's perfect record in these World Cup qualifiers intact.

Elsewhere Northern Ireland had to settle for a disappointing scoreless draw despite dominating possession against a toothless Bulgaria at Windsor Park.

Stuart Dallas hit the post with a first-half header for the hosts while Gavin Whyte and Niall McGinn went close after the break.

The visitors almost stole a win at the end but Bailey Peacock-Farrell produced a superb save from Dimitar Iliev.

It leaves NI with one point from two World Cup qualifiers and they are still looking for a first win during 90 minutes in 11 matches under Ian Baraclough.

Their next Group C game is away to Lithuania in September.

Twitter
More in this category: « SA Rugby president backs idea of a return of fans for Lions tour. Naomi Osaka loses to Maria Sakkari in quarter-finals of Miami Open. »
back to top