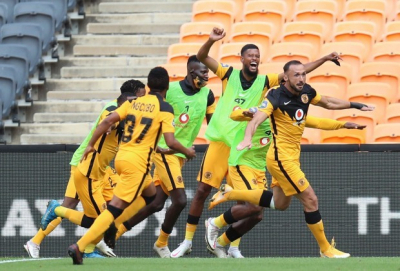 Kaizer Chiefs will be seeking revenge when they host Wydad Casablanca in Johannesburg on Saturday 3 April for their penultimate CAF Champions League Group C match.

Kick-off at the FNB Stadium is set for 6pm CAT.

The last meeting of these teams – which was rescheduled and played on neutral ground in Ouagadougou in Burkina Faso in February – saw Wydad with an emphatic 4-0 victory, with goals from Mohamed Ounajem, Ayoub El Kaabi, Simon Msuva and Yahya Jabrane.

Chiefs have since recovered that heavy defeat and find themselves level on points with Guinea’s Horoya AC in a battle to join the Moroccan heavyweights (who have already guaranteed progression) in the quarterfinals.

The Amakhosi’s last outing in this competition was a 0-0 draw away to bottom-of-the-log Petro de Luanda in Angola, a result manager Gavin Hunt was not too displeased with.

"I just thought our final ball and final pass around the box let us down, and that's just due to quality so we have to be better there... The draw I think was a fair result," said Hunt.

"Obviously disappointed, but you've also got to take a lot of things into consideration. I think the team did well [under the circumstances]."

Hunt has since confirmed that both Khama Billiat and Leonardo Castro will be in contention for this weekend's game, though warning that they will not be able to last the entire 90 minutes.

"Billiat's training again, so he'll certainly come in the reckoning, and Castro is obviously fit again, so it will give us certainly a little bit more [fire power],"

"In the Derby we had nothing on the bench, so it was difficult for us, but they are back now and that will make a big difference to the team and give us a little bit more.

"Are they fit enough to play 90 minutes? I don't think so, but at least we've got them available again."

Wydad’s last result was a 0-0 draw away to Horoya in Conakry, bringing their points tally to 10 from a possible 12 and securing a berth in the next phase of the Champions League. A win in Johannesburg on Saturday will guarantee top spot and thus see them avoid fellow group winners in the quarterfinals.

The other Group D match sees Petro de Luanda host Horoya AC in the Angolan capital and will be played simultaneously.