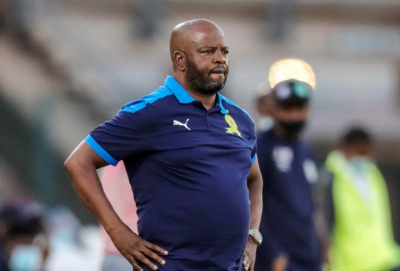 Mamelodi Sundowns will face off with Al Hilal in the CAF Champions League Group B match at the Al Hilal Stadium in Omdurman on Friday.

Sundowns have maintained their 100 per cent record in Group B when they claimed a 1-0 victory over DR Congolese giants TP Mazembe in a game that took place in Pretoria on March 16.

As a result, the South African champions qualified for the quarterfinals having defeated Mazembe (twice), Al Hilal and Belouizdad.

Sundowns co-coach Rhulani Mokwena says they are bracing themselves for a poor pitch at the Al Hilal Stadium, having watched the game between Sudan and Bafana Bafana which was played at the same venue.

"The reality is that the stadium is not in the best condition from an electrical perspective. We are not engineers. We got a report the lighting is not in good condition," Mokwena said.

"You can see the game against Bafana Bafana, the other side was dimmer in the second half, the side of [Innocent] Maela. But the reality is when the pitch is not like that, they have to move so that we don't have complications. It augurs well for the match and for our preparations."

Meanwhile Al Hilal remain winless in Group B after being held to a 0-0 draw by Algerian club CR Belouizdad in a game that was played in Omdurman on March 16.

Al Hilal had eight players in the Sudan squad which qualified for the 2022 Africa Cup of Nations finals after securing 2-0 wins over Sao Tome and Principe, and South Africa.

Their star striker Mohamed Abdelrahman scored in both matches and he will now be keen to inspire Al Hilal, who are coached by Ricardo Formosinho, to a win over Sundowns.

The previous encounter between Sudanese giants and Sundowns was on 13 February 2021.Sundowns secured a 2-0 victory over Sudan in the Group B match which was played at Loftus Versfeld Stadium.
Mamelodi Sundowns starting line up:

Twitter
More in this category: « Billiat,Castro gives Chiefs major boost ahead of their crunch CCL tie against Wydad AC. Brumbies pip Waratahs in heartbreaking finish while Highlanders stun Crusaders in huge upset. »
back to top