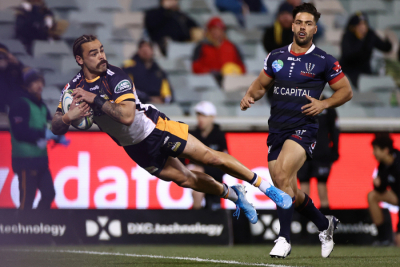 Brumbies returned to the top of the Super Rugby AU standings but had to hang on grimly to beat the winless New South Wales Waratahs 24-22 at the Sydney Cricket Ground on Friday.

The Brumbies scored four tries to three to make it five wins out of six and move above the Reds, who take their 100 per cent record in this year’s competition to the Melbourne Rebels on Saturday.

Tom Banks, Tom Wright, Andy Muirhead and Folau Fainga’a all went over in the first half to give the Brumblies a 24-10 lead but the Waratahs fought back to come close to tying the game and taking it into extra time.

The defeat was a sixth in a row for the Waratahs but it was a much improved performance after they fired coach Rob Penney following a record home loss to the Reds last weekend.

The Brumbies made the perfect start with Banks blasting through the home defence on a 60-metre run for the opening try in the fourth minute, followed by Wright scoring on the right wing soon after having done well to keep from going into touch.

But the Waratahs were back level after Will Harrison’s penalty and a 22nd-minute try from prop Harry Johnson-Holmes after a quick tap penalty from captain Jake Gordon, returning from an ankle injury.

Poor tackling, however, allowed Muirhead to punch right back for the Brumbies and they went further ahead when a rolling maul put Fainga’a over.

The scoring dried up in the second half but in the 65th minute, the Waratahs reduced the deficit to seven points after a charge down allowed Harrison to go over and give the home side hope of a comeback.

Waratahs then benefited from a last-minute infringement by Tom Cusack, who was found to have intentionally slapped down the ball and from the resultant penalty, James Ramm went over in the corner.

Yet the conversion, which would have made it 24-24, was missed by Harrison, handing the Brumbies a narrow victory.

Meanwhile tries from Otago Highlanders' Billy Harmon, Michael Collins and Connor Garden-Bachop handed the Canterbury Crusaders their first defeat of the Super Rugby Aotearoa season on Friday as the visitors claimed a surprise 33-12 victory in Christchurch.