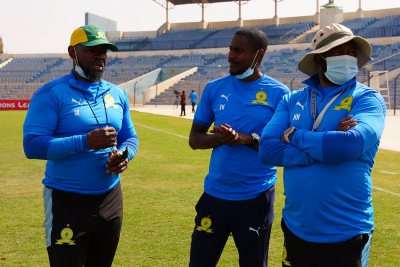 Mamelodi Sundowns maintained their unbeaten record in the CAF Champions League after playing to a goalless draw with Al Hilal Omdurman.

Sundowns looked to make the early breakthrough from a layoff by Mauricio Affonso to Gaston Sirino following good work from Khuliso Mudau, but the Uruguayan narrowly missed target.

The host began to show face a little before the 20th minute as Mohamed Abdel Rahman Yousif worked goalkeeper Ricardo Goss to a low save with a low shot from an acute angle in the area.

However, Sundowns regained momentum towards the half-hour mark and saw a header from Rushine De Reuck scooped off the goal-line.

Hilal let the Brazillians off the hook when an attempt from Abuaagla Abdalla inside the area crashed off the woodwork with the defence in sixes and sevens, while another promising attempt from the Blue Lions showed after Yousif fired narrowly across the far side.

Sundowns were defending deep in their own half, with Al-Hilal having the momentum but the Sudanese side were struggling to convert clear cut chances.

Hlompho Kekana came close to breaking the deadlock for the visitors in the last nine minutes with a long strike that caught Achrine out of his area but unfortunately for Sundowns hit on top of the crossbar.

A share of the spoils was how it finished in the city of Omburman,with Sundowns, already qualified remaining unbeaten at the top of the group with 13 points while Al-Hilal remained second with four points.