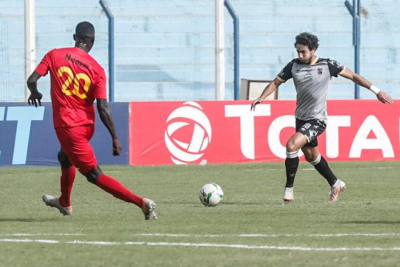 Al Ahly have managed to reach the CAF Champions League quarter-finals despite a 2-2 draw to Sudan’s Al-Merrikh.

The Reds entered the game sitting second in Group A with seven points, three behind leaders Simba and three ahead of AS Vita Club while Al-Merreikh were sitting bottom with just one point.

A point from Sudan would be enough for them to advance to the knockout rounds or a defeat of at least a two-goal margin, but with Simba defeating Vita Club.

And this is exactly what happened as Al Ahly managed to come back from behind and force Al-Merrikh to a 2-2 draw, while Simba thrashed Vita Club 4-1 at home.

The Sudanese side had the upper hand since the start of the game and they managed to take the lead after just 25 minutes through Ramadan Agab, whose header found El-Shennawy’s top corner.

Few minutes later, Saif Terry made it 2-0 after he was sent through on goal by Tony Edjomariegwe and he managed to beat El-Shennawy easily.

Just seconds before the half-time whistle, Terry earned his side a penalty, but it missed the target completely as both teams headed into the tunnel with a scoreline of 2-0.

Al Ahly were much better in the second period and could have scored early by Mohamed Sherif, but the goalkeeper denied him. Ramadan Agab also went through on goal, but his strike was saved by Mohamed El-Shennawy.

The last 10 minutes is when Al Ahly decided to show their true self after Taher Mohamed Taher earned his side a penalty in the 82nd minute. Badr Benoun stepped up and managed to turn the ball in.

Five additional minutes were awarded by the referee and by typical Al Ahly fashion, Yasser Ibrahim managed to equalize the scoreline after heading in Mohamed Magdy Afsha’s free-kick in the 94th minute.

The draw means that Al Ahly have secured their place in the quarter-finals as the second-placed team with eight points behind leaders Simba, who now have 13.

The last round will see Al Ahly host Simba and Al-Merrikh travel to Vita Club with both games considered to be a dead rubber.