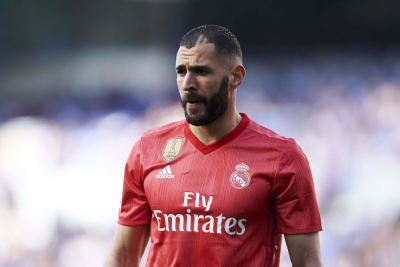 Real Madrid forwards Marco Asensio and Karim Benzema struck to give their side a 2-0 win at home to Eibar in La Liga on Saturday, keeping up the pressure on leaders Atletico Madrid ahead of Tuesday's Champions League clash with Liverpool.

The Frenchman recorded his 24th goal of the season with a firm header from eight yards in the 73rd minute.

Marco Asensio scored the opener when he slotted in from midfielder Casemiro.

The win moves Real to within three points of leaders Atletico Madrid, who are at Sevilla on Sunday.

For coach Zinedine Zidane this win was the perfect way to mark his 250th game in charge of Los Blancos.

The French coach had been under pressure earlier this season, following the Copa del Rey defeat by Alcoyano, but his side have been grinding out wins since February and could still finish with the La Liga-Champions League double.

Real dominated struggling Eibar for much of the match. Aside from the goals, Spain international Asensio, Benzema and Casemiro had efforts ruled out for offside, while Isco went close with a free-kick that came off the bar.

Eibar, second from bottom on goal difference, looked threatening going forward but lacked a cutting edge. Alejandro Pozo sliced an effort wide from inside the area and Real keeper Thibaut Courtois did well to block a low drive from Takashi Inui late in the game.

Twitter
More in this category: « Al Ahly reach Champions League quarter-finals despite a draw. Neymar sees red as Lille move top with win over Paris Saint-Germain. »
back to top