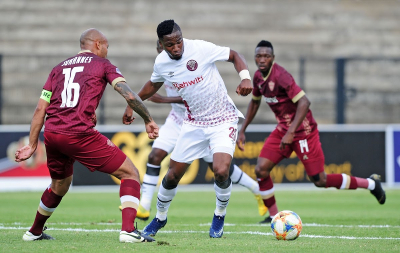 Maritzburg United claimed a key win in their fight against relegation from the DStv Premiership, thrashing fellow strugglers Chippa United 5-1 at the Harry Gwala Stadium in Pietermaritzburg on Saturday evening.

A brace of goals from Thabiso Kutumela inspired the Team of Choice to a victory which lifts them to 13th place and opens up a four-point buffer to the relegation playoff berth.

Chippa, meanwhile, drop to 14th – just one point and one place above the red zone.

The Chilli Boys claimed the lead on 28 minutes, with Mokhele Maloisane finishing off with composed aplomb as the visitors put together a fine attack. Ayabulela Konqoba provided the assist for the opening goal.

The Team of Choice responded superbly to going behind and deservedly claimed an equaliser on 36 minutes. A clever flick from Bongokuhle Hlongwane put Kutumela in on goal and the striker coolly side-footed home with his left to make it 1-1.

Two minutes later Maritzburg hit the front, with Kutumela continuing his red-hot form with another goal. This time the striker took advantage of some space on the edge of the penalty area, cracking home from a half-volley to put his hosts 2-1 up.

A third goal for the Team of Choice duly arrived in the 50th minute: Tebogo Tlolane played a delightful ball to set up Hlongwane, who set himself before firing past the goalkeeper into the bottom corner of the net to make it 3-1.

The visiting side almost pulled one back in the 53rd minute, but both Konqoba and striker Augustine Kwem were denied by Maritzburg goalkeeper Marcel Engelhardt, who made an outstanding double save to defend his side’s two-goal advantage.

A defensive blunder from the visitors saw Jose Ali Meza slip in Tlolane, who cut inside before firing in at the near post for 4-1.

Meza then turned from provider to scorer, finding the net himself in the 86th minute of the match to make it 5-1 and put an exclamation point on a potentially season-changing performance from Maritzburg United.

Elsewhere Vuyo Mere struck a last-gasp equaliser as Swallows FC saved themselves from a first home defeat of the DStv Premiership season, holding Golden Arrows 1-1 at the Dobsonville Stadium on Saturday afternoon.

The result sees the Birds retain their unbeaten home record, though they have now gone nine league matches without a win and remain in sixth place, while second-placed Abafana Bes’thende missed out on the chance to move just one point behind leaders Mamelodi Sundowns.

Twitter
More in this category: « Neymar sees red as Lille move top with win over Paris Saint-Germain. Chiefs lands a much needed CCL win despite receiving two red cards. »
back to top