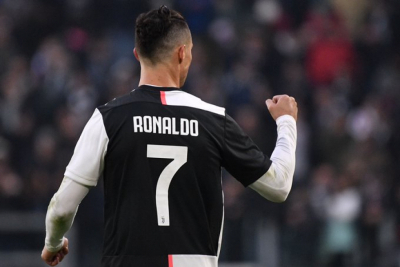 Juventus needed a 79th-minute equaliser from Cristiano Ronaldo to rescue a 2-2 draw in the Turin derby against relegation battling Torino on Saturday, leaving the champions' Serie A title defence in tatters.

Midfielder Federico Chiesa opened the scoring for Juve in the 13th minute before Antonio Sanabria equalised midway through the first half.

Sanabria put Torino in front 13 seconds after the restart, doubling his tally after a defensive lapse.

But Ronaldo headed home a 79th-minute leveller after a VAR review with the forward initially flagged offside.

Juventus are now nine points behind Inter Milan in fourth, with the Serie A leaders facing Bologna in the late kick-off at 19:45 BST.

Struggling Torino stay 17th, two points above the relegation zone, and have gone 14 games without defeating their city neighbours.

With the game ending at 2-2 however, all eyes will be on Andrea Pirlo with some reports claiming that his job is on the line. They currently sit fourth in the division with fear of missing out on the Champions League, which will certainly not be good enough.

Will Pirlo be sacked in order to assure Champions League football?

Twitter
More in this category: « Chiefs lands a much needed CCL win despite receiving two red cards. Bayern Munich close in on ninth-straight Bundesliga title. »
back to top