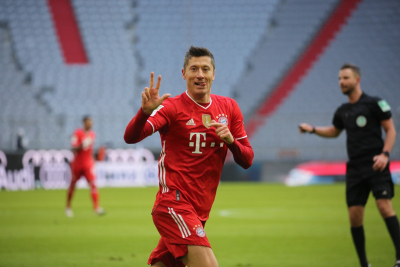 Leon Goretzka's first-half goal was enough to give Bundesliga leaders Bayern Munich a crucial 1-0 victory at second-placed RB Leipzig on Saturday, as they opened up a seven-point lead at the top and edged closer to a ninth-straight league crown.

Bayern continue their Champions League defence in the quarter-finals against Paris St-Germain on Wednesday.

Leipzig are all but guaranteed to qualify for the Champions League for a third successive season, as they hold a 14-point lead over fifth-placed Borussia Dortmund, who lost against Eintracht Franfurt earlier on Saturday.

Bayern, who are without star striker Robert Lewandowski for up to a month with a knee injury, host Union Berlin next Saturday (14:30 BST), while Leipzig travel to Werder Bremen at the same time.

Bayern, facing Paris Saint-Germain in the Champions League quarterfinals on Wednesday, are on 64 points, with Leipzig second on 57. VfL Wolfsburg, 1-0 winners against Cologne, are third on 54.

Twitter
More in this category: « Juventus rescue point in the Torino derby but eyes on Pirlo. Ashleigh Barty retains title after Bianca Andreescu injury - Miami Open. »
back to top