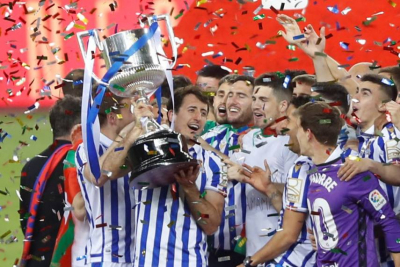 Real Sociedad beat local rivals Athletico Bilbao 1-0 in the rescheduled 2020 Copa del Rey final on Saturday to get their hands on a major trophy for the first time since 1987.

After a five-minute VAR review of the decision to award a penalty, Mikel Oyarzabal sent the keeper the wrong way to win the 2019-20 trophy for Sociedad.

Inigo Martinez was initially sent off for fouling Portu in the box but the decision was downgraded to a yellow.

Bilbao face Barcelona in this season's final on 17 April, looking to end their own 37-year wait in the competition.

In a game of few chances, Martinez came closest for Bilbao with a 25-yard effort that was tipped over the bar in the first half.

"It's a beautiful day on which so many things come to your mind. Giving this victory to our fans was the best thing we could do," said match-winner Oyarzabal.

"There are many people who would like to have been here and there are many friends and family who left us in the worst possible way. This is for everyone, we felt their presence. There's nothing like this feeling."

"It's very tough for us, this was a match we were so excited about and thought we could win," he said. "It's very painful whenever you lose a final, regardless of who you lose to. It's a very sad day for us."