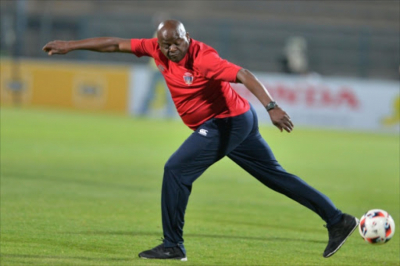 Dan Malesela has reportedly been fired by Chippa United following the club’s 5-1 defeat to Maritzburg United in the DStv Premiership on Saturday.

Malesela joined United in December in a deal that was to last until the end of the 2020-21 campaign‚ with an option to renew for a season.

It was Malesela's fourth stint at the club and Mpengesi said at the time the 55-year-old Malesela was very popular with the club’s supporters.

"Affectionately known as 'Dan Dance'‚ he ... led the team to a best-ever league finish (sixth in the 2015/16 season) and to a memorable 2017 Nedbank Cup semifinal place, "Mpengesi said in December.

"Malesela comes in highly regarded for his man management skills and carries a proven track record of working with young talent."

Despite booking a ticket in the semifinals of the Nedbank Cup, the Chilli Boys had only managed one win in nine league games.

With Eymael now cleared to coach in SA and missing out on the Baroka job, it’s likely Mpengesi will turn to the Belgian again.

United are in 14th place on the premiership standings and have not won a match since beating Black Leopards 3-0 in January.