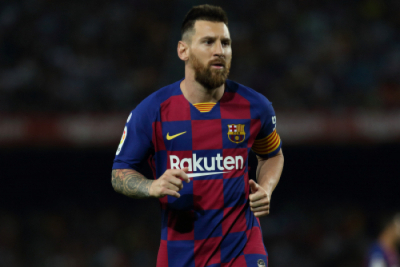 Ousmane Dembele scored a dramatic late winner to give Barcelona victory over Real Valladolid and a huge boost in their La Liga title challenge.

Barcelona move up to second, one point behind leaders Atletico Madrid, thanks to a sixth La Liga win in a row.

Barca looked as if they were going to be frustrated but the turning point was Oscar Plano's straight red card for a dangerous foul on Dembele.

Both sides hit the woodwork in the first half - Kenan Kodro's header for Valladolid and Pedri's low drive for Barcelona being tipped on to the post.

With time running out, Dembele pounced on a loose ball at the far post and hit a low volley past Plano to move his side up to 65 points from 29 games, one behind Atleti with nine games left to play in the season.

"This shows how difficult this league is and that we'll have to really fight in every game to win it," said Barca defender Clement Lenglet.

"We faced a great side who played out of their skin, it was a really difficult game for us but an important victory. This run is all down to hard work, things weren't clicking for us earlier in the season but now they are."

Barcelona's title hopes are in their hands now after Atletico lost to Sevilla at the weekend. Barca visit Real Madrid in El Clasico this Saturday and host Atletico next month.

Koeman also weighed in on the future of match-winner Dembele, who has shown good form this season after a frustrating, injury-hit start to life at the Camp Nou since joining from Borussia Dortmund in 2017.

"Dembele's an important player," said Koeman. "He's shown that today with his performance and above all with the goal that gave us three points.

"Ousmane's development this season has been really good. Physically he's improved a lot, I think that's been the key to his quality and consistency to play so many games. So yes, if it's up to me, I would like him to stay with us."

Twitter
More in this category: « SAFA's Technical Committee to meet this week to finalise appointment of the new coach. West Ham captain Noble on victory over Wolves: Our great season is on track. »
back to top