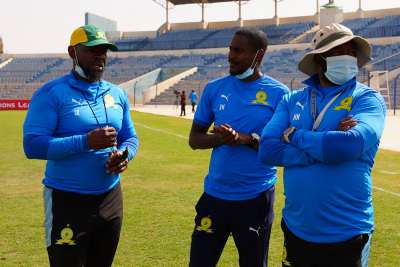 Mamelodi Sundowns moved six points clear at the top of the DStv Premiership after coming from behind to defeat Tshakhuma Tsha Madzivhandila 3-1 on Tuesday afternoon.

Rivaldo Coetzee, Sphelele Mkhulise and Sibusiso Vilakazi all scored for the first time this season as the Brazilians extended their unbeaten run to 19 league games this term and opened a six-point lead over nearest chasers Golden Arrows – having played two games less than the Durban club. The result also sees Tshakhuma remain in 15th place – the relegation playoff spot.

Tshakhuma claimed the lead against the run of play in the 18th minute, with Thembisani Nevhulamba heading home from Thabo Mnyamane’s free kick delivery from the right flank. The scorer appeared to be marginally offside, but ‘Downs were still guilty of poor marking at the set piece.

The goal saw TTM’s confidence rise and they created further chances to add to their advantage, including one on the half-hour mark which saw ‘Downs goalkeeper Denis Onyango forced into a sharp save to deny Mnyamane at close range.

However, the home team’s goalkeeper was helpless to prevent an equaliser in injury time before the interval: Gaston Sirino’s corner kick to the near post was headed home by Rivaldo Coetzee, who did not even need to get airborne, leaving the game locked at 1-1 at halftime.

Sundowns picked up in the second half where they left off in the first and almost claimed the lead 11 minutes after the restart: Sirino beat Washington Arubi to a great through ball from Lebogang Maboe and lobbed a shot on target, but Lehlohonolo Nonyane recovered to make a goal-line clearance.

The Brazilians kept up the pressure in attack and were finally rewarded in the 69th minute. Lyle Lakay whipped in an in-swinging cross from the right to pick out Mkhulise, who ghosted in at the back post and nodded home to put the visitors ahead.

Tshakhuma’s Mnyamane was a thorn in the side of Sundowns’ defence and nearly levelled the game with just over 10 minutes of regulation time to play, as his shot direct from a free kick had the beating of Onyango, but not the woodwork.

The Brazilians ensured they would not have a nervy finish to the game when they netted a third in the 81st minute. Substitute Vilakazi arrived late in the danger area to meet Peter Shalulile’s cross and volleyed home to make it 3-1.