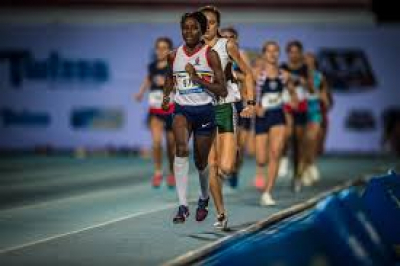 Rising shot put star Mine de Klerk stole the show with a spectacular record-breaking performance on Wednesday, as the TWIZZA ASA Age Category T&F (u16-u20) Championships 2021 got under way at Dal Josaphat Athletics Stadium in Paarl.

De Klerk's best effort landed at 17.57m* in the women's U20 shot put final, shattering the previous South African record of 16.95m which had been held by Simone du Toit for nearly 15 years.

She was in such good form that De Klerk beat former African Youth Games champion Dane Roets by more than two metres, with Roets taking the silver medal (15.35m).

Earlier, race walkers had opened the annual age group championships with Keandra Jooste destroying the field to win gold in the U16 girls 5km walk in 25:46.78.

In other events, Wynand Swanepoel won gold in the U20 men's discus throw with a 55.77m heave, while Migael van Huysteen secured victory in the U18 boys' pole vault (4.71m) and Deacon Cooper took the U16 boys' hammer throw title with a best effort of 44.20m.

Closing out the opening day's action, Athletics Gauteng North won all three relays on the programme.

"Congratulations to Mine de Klerk for her outstanding achievement in breaking such a long standing record and winning the gold medal," said Aleck Skhosana, the President of Athletics South Africa. "We are particularly happy to see her as champion as we hope this will inspire other young women to take up this highly specialised event.

"It’s a good start to the championship and we believe the best is yet to come despite the background that Covid pandemic derailed many athletes young and older.

"We were also saddened that we had to deny entry to parents and other athletics enthusiast who wanted to watch and were will to pay. The current National Disaster Act regulations do not allow us to allow spectators at our events."

Twitter
More in this category: « Mbappe scores a brace as PSG beat Bayen while Mount and Chilwell secure win for Chelsea. French Open Postponed by a Week Due to COVID-19 Outbreak. »
back to top