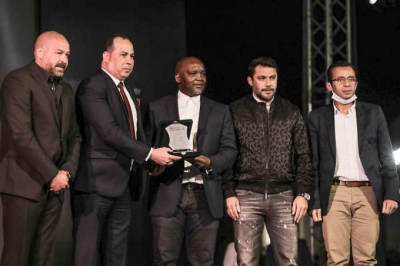 Al Ahly skipper and goalkeeper Mohammed El-Shennawhy has been tested positive for COVID-19 just days ahead of the Cairo derby against Zamalek.

The 32-year-old is considered an integral part of Al Ahly’s squad, having kept 13 clean sheets in 20 games across all competitions this season.

He was one of the main reasons behind the Reds’ bronze medal triumph at the Club World Cup, when he saved two penalties against Copa Libertadores champions Palmeiras.

However, Al Ahly will now have to cope without him as the player’s swab test result returned positive, which could see him miss the Cairo derby next week.

Some reports emerged, saying that El-Shennawy’s symptoms are minor and he could recover in time for the game, but until now nothing is confirmed.

If he fails to make the game, Ali Lotfi will replace the El-Shennawy between the sticks, with Mostafa Shobier being named as the substitute goalkeeper.

Meanwhile Al Ahly coach Pitso Mosimane has been named as 'Best Manager in Egypt' by the Sports Critics Association for his exploits with the Red Devils.

Since signing for Al Ahly in October 2020, Mosimane has been quite successful as he won all competitions he took part in [CAF Champions League and Egypt Cup] apart from the Club World Cup where he finished third.

He now also reached the Champions League knockout stages with the Red Devils, where he will face either Wydad Casablanca, Mamelodi Sundowns or Esperance Sportive de Tunis.

The Egyptian Sports Critics Association has, therefore, handed him the Best Manager award in their annual ceremony.

The South African expressed his delight after being given the accolade and refused to comment on the upcoming Cairo Derby next week.

"I’m very grateful to have been awarded the Best Manager award, and I thank everyone who voted for me," Mosimane said in his acceptance speech.

"I accept it on behalf of the players, the coaching staff, the board of directors and the fans."

"I feel here as if I’m at home in Egypt. I feel welcomed and warmth, and I have a great responsibility with a big team.

"We have a match on Wednesday, and after that I will talk about the derby," the South African concluded.

The 56-year-old coach has recently been linked with both Egyptian and South Africa national team coaching job, as he reportedly became the South African Football Association’s main target.

However, it’s quite unlikely that he will leave the Red Castle anytime soon as he’s contracted to stay until June 2022. With Bafana Bafana needing a replacement for Molefi Ntseki before the World Cup qualifiers next June.

Twitter
More in this category: « Man City and Tottenham receive 2,000 tickets each at Wembley with Covid testing requirements. England all-rounder Ben Stokes ruled out of IPL with broken finger. »
back to top