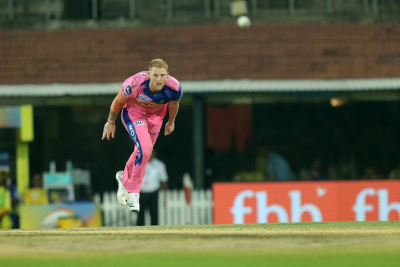 England all-rounder Ben Stokes has been ruled out of the Indian Premier League with a broken finger, his Rajasthan Royals team say.

The Royals say Stokes, 29, was injured while fielding during their four run loss to Punjab Kings on Monday.

England say their medical staff are in contact and Stokes will have a second X-ray "in the next 24-48 hours" to assess the seriousness of the injury.

England's next fixture is a Test against New Zealand starting on 2 June.

The IPL runs until 30 May with the possibility of England players missing the New Zealand Test if their side qualifies for the latter stages.

England bowler Jofra Archer, another Royals player, has missed the start of the tournament because of an elbow injury and returned to training on Monday in a bid to prove his fitness.

The Royals say Stokes will remain in India to support the rest of squad and they will review replacement options.

Monday's defeat was their first game of this year's IPL with Stokes bowling one over for 12 before being dismissed for a three-ball duck.

After the two-Test New Zealand series, England's year also includes a home Test series against India, a Twenty20 World Cup and the Ashes in Australia in the winter.