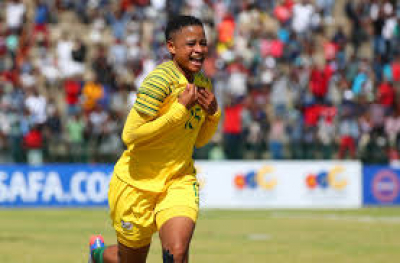 Head coach of the Sasol-sponsored Banyana Banyana believes her side is making good progress following months of inactivity – but now she wants stronger opposition to prepare for the future.

There were three goal scorers – Noko Matlou and Thembi Kgatlana (both 2 each), as well as Gabriela Salgado.

Ellis is also excited that she won the encounters without the bulk of the overseas-based players as that confirms the strength and growth of the team Banyana Banyana will next in action in the June FIFA Calendar date where Ellis is confident they will secure two other friendly matches – in the meantime, she and her technical will have a chance to look for more players in the Sasol League as well as the SAFA Women’s National League that is starting later this month

Meanwhile the South African Football Association (SAFA) has announced the qualifying programme for the Second Edition of FIFAe Nations Cup and SAFA eCup online championships. After the postponement of the 2020 edition due to COVID-19 outbreak, the 2021 Edition is digitally focused to encourage gaming and participation from home or a safe place for players.

This selection tournament limited to FIFA ranked players is taking place on Thursday & Friday, 15 & 16 April 2021 respectively. Two champions will be crowned from the winners of both PlayStation 4 and Xbox using EA’s new FIFA21 game make it into the 2021 eNational team joining Bafana Bafana, Banyana Banyana and other national teams.

"We are looking into the future with digital engagement and how fitting that we are part of a global platform with FIFA and hoping to create new heroes and heroines when players don the national colours to represent the country in eSports. We are playing catch-up to the rest of the world which is expanding into the digital realm to grow the game and its support among younger, tech-savvy fans and build on SAFA’s digital arsenal into 4IR on how we operate and how we connect with our fans. There is an added incentive this year to compete as the top four South African players will form the official South African eNational Team for the year 2021."

Registration is limited to players ranked on FIFA and South Africans citizens who are 16 and above will be competing online.

Gaming fans wishing to follow the progress of the tournament can find further details such as where the finals will be streamed on SAFA’s social media channels as well as www.safa.net and www.ediski.com.

Twitter
More in this category: « A big 3 weeks of opportunity for SA pros. Percy Tau,Themba Zwane named in preliminary SA U23 Olympic squad. »
back to top