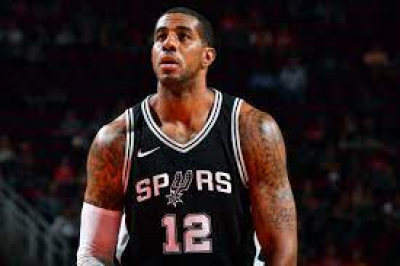 Seven-time All-Star LaMarcus Aldridge says he endured "one of the scariest things" in his life in his final game, playing with an irregular heartbeat which has since forced him to retire.

He called time on his 15-year NBA career on Thursday, five days after suffering heart problems playing for Brooklyn against the LA Lakers.

The 35-year-old forward only joined the Nets as a free agent 13 days earlier.

"It is time I put my health and family first," Aldridge said.

"Though I feel better now, what I felt with my heart that night was still one of the scariest things I've experienced."

The former Portland Trail Blazers and San Antonio Spurs player was in 2007 diagnosed with Wolff-Parkinson-White syndrome - an abnormality that can cause a rapid heartbeat.

In a statement posted on social media, Aldridge said after Saturday's game the abnormal rhythm of his heart "got even worse" and that he was sent to hospital after telling the team the following day.

"His health and well being are far more important than a game of basketball," Marks said.

"We know this wasn't an easy decision for him."

Aldridge, who averaged 19.4 points and and 8.2 rebounds per game during his career, joined the Nets in March after nearly six seasons with Spurs.

He started his career in 2006 with Portland, who took him as the second overall pick in the draft that year.

Both his former clubs paid tribute to Aldridge on social media.

Meanwhile, the LA Lakers lost their first game played in front of spectators at the Staples Center for more than a year on Thursday.

The Boston Celtics overcame the Lakers 121-113 as around 2,000 fans were allowed to watch at the 20,000-capacity venue after health officials in Los Angeles County recently relaxed Covid-19 restrictions.

Lakers coach Frank Vogel said despite the defeat, they got a boost from having spectators back.

"When you get energy like you get tonight, it feels good," Vogel said. "Hopefully we will be at capacity at some point."