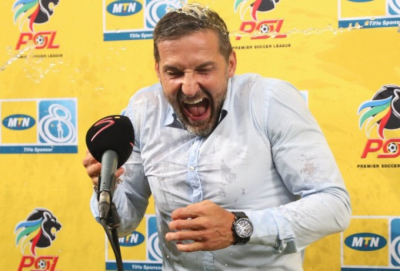 Orlando Pirates coach Josef Zinnbauer admitted there was nowhere to hide in the wake of his team’s 4-1 mauling at the hands of Mamelodi Sundowns in the Nedbank Cup quarterfinal at Loftus stadium.

Zinnbauer admitted their opponents were the better team as his hopes of adding a second trophy this season, after the MTN8, to their list of achievements was brought to a grinding halt.

"I’m disappointed, it's clear the result looks not 100 percent like the game, but it [his side’s performance] was not enough today to win this game," Zinnbauer said.

"In the first half, for 10 or 20 minutes we were completely out of the game, then we get the goal, then maybe it was a wakeup call. We came closer to our goals, then we scored.

"Then we had two chances to score [but] we had bad luck. Second half the same, we come out, we were not in [the game], then we concede and you have to play all or nothing.

"You have to manage the game more in offense and you step out of the defence line and you have to try to score.

"So finally you play for all or nothing and then in the last 10 minutes we make more forward runs and then you get the goals, it's a problem. But I say again, the performance was not enough, Sundowns were better but the result looks a little bit too high.

"Maybe they [the Pirates players] had too much respect, I don't know, but after the game you don't have the right answer. I'll watch my game again and then we find the points where we have to improve for the next game.”

Pirates are next in action on Wednesday when they host Algerian side ES Setif in a crucial CAF Confederation Cup clash.

A guide to guide to Nedbank Cup Semifinals as the four remaining teams battle it out for a place in the final on May 8:

Chippa United have lost their previous two semifinals, to SuperSport United in 2017 and Kaizer Chiefs in 2019, but are hoping to make it third time lucky under rookie interim coach Siyabulela Gwambi.

All three of their previous ties in this season’s Nedbank Cup have been at home, with two of those going to extra-time (vs Free State Stars in the Last 32 and Cape Town City in the Last 16). This will therefore be their first road trip.

Chippa have only won one of their eight away matches in the Nedbank Cup, which came at third-tier Phiva Young Stars (2-0) in 2018. They did beat BidVest Wits on penalties after a thrilling 4-4 draw in 2019.

Pretoria Callies have also needed extra-time in their last two rounds, seeing off JDR Stars and Cape Town All Stars on penalties. Their other tie, against Royal AM (1-0) was also a meeting with a fellow GladAfrica Championship side.

Masutha was in charge of TTM earlier this campaign when they stunned SuperSport United 1-0 in the Nedbank Cup Last 32, but was axed straight after that game.

This will be a first ever meeting between these two sides.

Mamelodi Sundowns are currently on a club record eight-game winning run in the Nedbank Cup, and eyeing SuperSport United’s competition record of 10, and have scored 11 goals in their three matches this campaign (three vs Stellenbosch and four each vs Polokwane City and Orlando Pirates).

This tie will be the seventh of their last nine Nedbank Cup games that have been played at home. They have staged 21 home games in the competition since 2008, winning 16 of those, with no draws. In fact, their last home draw in the competition was all the way back in 2006 (0-0 vs Kaizer Chiefs).

TTM have played all three Nedbank Cup games in the Limpopo province, though their quarterfinal was away at Black Leopards (2-0) in Thohoyandou.

It is mostly hit or miss with TTM, they have been involved in just two draws in their last 15 games (W5 L8), with one of those the Nedbank Cup Last 16 shoot-out victory over Swallows FC (2-2).

Aside from that 3-1 win for Sundowns, the other league meeting between these two clubs this season finished 0-0 at Loftus Stadium in late October.