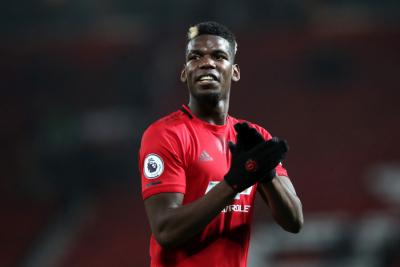 He re-joined United in 2016 for a then-world record £89m when Mourinho was manager at the Old Trafford club.

But the pair fell out by the time Mourinho was sacked in December 2018.

"Once I had a great relationship with Mourinho," Pogba told Sky Sports. "Everybody saw that and the next day you don't know what happened."

The 28-year-old France international added: "That's the strange thing I had with Mourinho and I cannot explain to you because even I don't know."

Responding to Pogba's comments after Spurs' 2-2 Premier League draw with Everton on Friday, Mourinho told Sky Sports: "I would like to say that I couldn't care less with what he says.

Pogba helped United win the League Cup and Europa League in 2017 under Mourinho but he was stripped of the vice-captaincy by the Portuguese in September 2018.

He was also an unused substitute in a 3-1 defeat by Liverpool in what turned out to be Mourinho's final game in charge of Manchester United before he was replaced by Solskjaer.

"What I have now with Ole is different because he wouldn't go against the players," said Pogba.

"Maybe Ole wouldn't pick them, but it's not like he puts them on the side like they don't exist any more. That's the difference between Mourinho and Ole."

Mourinho's Tottenham were beaten 3-1 last Sunday by a United side containing Pogba.

"I am sure Mourinho said something that made people speak. That's what he does," said Pogba.

"We got the result that we wanted. Ole knows it and we enjoyed that moment.

"We know Mourinho and what he likes. We don't need this. We just focus on us.

"We won the game, he lost the game, and he doesn't want to speak about the game."

He added: "Everybody knows it. It's very Mourinho."

Meanwhile Harry Kane suffered a late injury after scoring twice to rescue a point for Tottenham against Everton at Goodison Park.

Nine days before the Carabao Cup final and 58 days before England's European Championship opener, Kane limped off in stoppage time with an apparent ankle problem.

The striker seemed to land awkwardly after jumping for a header when defending a corner late on.

Kane had earlier been at his clinical best, capitalising on two mistakes in the Everton defence to put Spurs ahead in the first half and grab a second-half equaliser.

In between Kane's strikes Gylfi Sigurdsson levelled from the penalty spot and gave Everton the lead by finishing off a fine team goal.

Everton pushed hardest for a winner and had the best chance to win it but Joshua King's effort was saved by Hugo Lloris and Richarlison fired the rebound over from 12 yards.

A draw suited neither side's pursuit of European football, with Tottenham staying seventh, five points behind fourth-placed West Ham and Everton a point and a place worse off, though they do have a game in hand.

Twitter
More in this category: « Zinnbauer admits there was nowhere to hide in the wake of 4-1 mauling. Joel Embiid makes Philadelphia 76ers history in win over LA Clippers - NBA. »
back to top